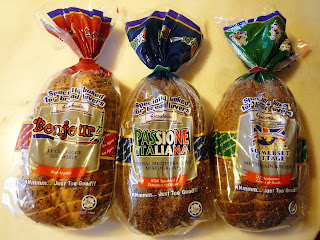 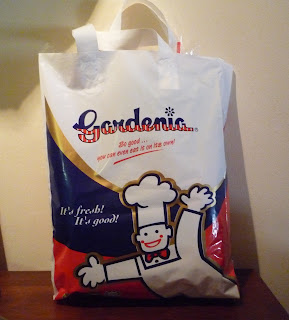 A bagful of delish wholesomeness..
A couple of days ago whilst lunching at my friend Ezzah's house in Kelang, this makcik found herself in receipt of a carrier bag containing three loaves of Gardenia bread in unfamiliar but eye-catching packaging.

The bread was presented by Yasmin, one of Ezzah's guests, to the few present, to introduce Gardenia's new flavours. I find it commendable that she is doing her bit, on her own time, to promote her company's products.

Gardenia has been my bread of choice for the longest time, in fact, from the time the brand entered the market in the mid 1980s. I Came, I Saw, I Ate; and I have been consuming it ever since. That's brand loyalty for you.

I don't give a hoot who owns Gardenia, then and now. It could very well be a hairy alien from a far-flung asteroid in the Milky Way for all I care; as long as the brand gives me a good, nutritious loaf at a decent price each time, I'm happy.

We have the freedom to choose what brand we want. We don't have to justify why. Neither do we need to oblige anyone by changing our mind if we are happy enough with what we have.

Personally, Gardenia has been on our family table for decades and that's the way it will stay, unless something truly drastic or unthinkable happens (losing its 'halal' certification, for example..)

When I was a child growing up in Bukit Besi, Trengganu in the late 1950s and early 1960s, we got our bread from the turbaned Punjabi fellow we called Benggali Roti.

His loaves were placed in a wicker basket which he carried on his shoulder, and Benggali Roti covered the entire mining town on foot each day, going from house to house until the sun disappeared.

Benggali Roti is today an extinct specie. He has been replaced  by the ubiquitous Indian breadman on motorcycle, whose hand-held airhorn's shrill 'pon! pon!' was music to any child's ear.

But I, as usual, digressed.

Realising that my newly-acquired loaves needed sharing, I contemplated dispensing them to neighbours. Then my daughter Awwa and sister Izah dropped by unannounced the day after(macam tau-tau aja ekk). Suffice to say each went home a loaf richer.

Last I heard, Gardenia ratings went up a couple of notches in both households. In mine, Bonjour - le classique is fast becoming Adieu, with le kenyang ruling the roost. You did right, Gardenia. Well done!

Bonjour has a generous sprinkling of sesame seeds (we ate it with garlic butter), Passione Italiana is packed with sun-dried tomatoes and olives (best eaten with olive oil) while dark Somerset Cottage is multi-grained (wonder of wonders, my sister's fat and fluffy Holland rabbits love multi-grained breads!)

Puteri, I must try them, hope they are sold at the supermarkets now!

I love the Gardenia raisin bread. So we most probably try this out. Thanks, Kak Puteri!

Your Sons's tuition teacher must be Chinese ..huh?

tell your son's tuition teacher to do what she's paid to do.

or did she get free bread for promoting mossommo

Cat - by now the beef curry must have tinggal serdak..lol

Nana - i think they are on the shelves now..

Ninot - me too.. and i like it spread with butter..

gardenia i love u.
cos last time i bought shares linked to this company n made money.
so there.

to me gardenia sedikit mahal for the simple reason massimo price themselves lower by 80 sen sebab they are 'ginny come lately' to capture the existing market. itu marketing strategy dia. berapa lama dia boleh bertahan at that price, wallahu'alam. i was told itu hanya introductory price.

Now I wonder, if I try the Iltalia bread, can I speak Italian?

Their Butterscotch bread pun so so yummy! I tried all the new ones excet the italia. Am sure sedap.Buat sandwich with chicken slices mmg soo yummy!

RJ: because ofyour posting, i went and bought the butterscotch bread yesterday.. sedap..