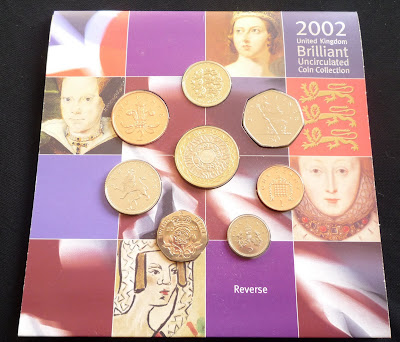 In commemoration of the six crowned Queens of England since 1066; Matilda, Mary Tudor, Elizabeth I, Anne, Victoria and Elizabeth II. This set was purchased during my working visit to the British Royal Mint at Llantrisant, Wales, in 2002, the year it was issued. 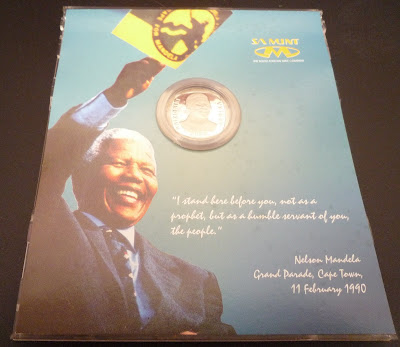 This Nelson Mandela commemorative coin is a gift from its minter, The South African Mint Company, during the 2002 World Money Fair in Basel, Switzerland. It remains one of my personal favourites. 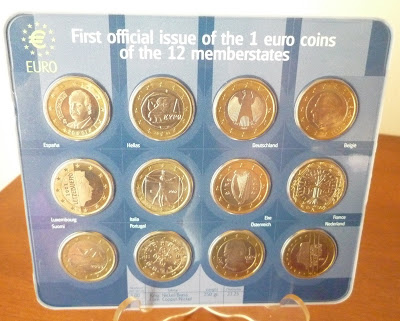 From January 1st, 2002, 12 of the 15 European Union members (at the time) completed their conversion to using the Euro instead of their own national currencies. The twelve states were Belgium, Germany, Greece, Spain, France, Ireland, Italy, Luxembourg, Netherland, Austria, Portugal and Finland. This set of 12 was issued to commemorate the occasion. 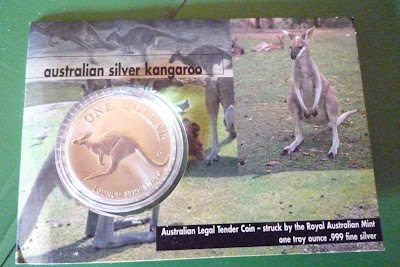 This 'australian silver kangaroo', with a face value of One Dollar, was struck by the Royal Australian Mint. It was made of one troy ounce of pure (.999) silver. I was attracted to the coin because of its design and the fact that it was made using the 'reverse frosting' technique which gives it a delicately frosted background. This was purchased during the Kuala Lumpur International Money Fair 2003. 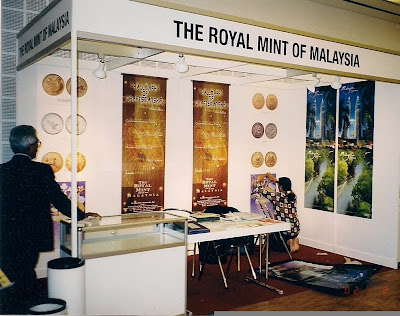 In the midst of setting up the Malaysian booth at the 2002 World Money Fair in Basel, Switzerland. Our participation was a runaway success; we sold 80% of what we brought to the show, the most popular being Bank Negara's "Coins of Malaysia 1990 - Limited Special Edition" series. 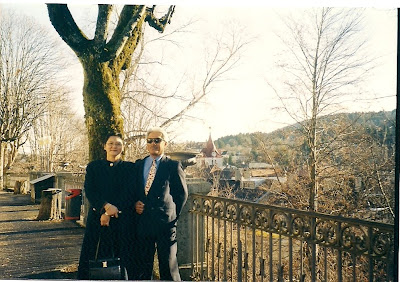 In scenic Leuggern, a town on the Swiss-French border, located in the canton of Zurzach, Switzerland. We were on a working visit to Faude & Huguenin, a private mint based in Leuggern, before flying off to UK to visit the 1,000 year-old British Royal Mint in Wales. This picture was taken just outside the parameter of the train station. It was early February and there were still snow on the slopes of Leuggern.

For The Love of Coins

A couple of weeks ago I received an intriguing e-mail inviting me to check out a "by invitation only" blog of fellow blogger Reme, a Singaporean journalist who writes under OpEd.

Reme had recently discovered the joys of numismatics and had wanted to share his newfound interest with me. Little did he know that coin collecting is also a hobby of mine. A delightful coincidence, this.

Popped in I did soon after and I was glad to have taken up on the invite because the tour of Reme's blog (and he had a few nice pieces on show) had somehow rekindled my own interest, left dormant for quite some time now.

Numismatics was, and will remain, an occasional hobby of mine. I didn't have the money to indulge in it in a big way (still don't); I splurged only when something truly delectable came along, the charm of which I simply could not resist.

The hobby began ten years ago when I came aboard the Royal Mint of Malaysia as the head of its corporate affairs division. The constant exposure to commemorative issues had somehow evoked a desire to build my own collection.

I was fortunate enough to be able to travel along whenever the Mint participated in international money fairs, to help manage the booth, keep up with new issues and get acquainted with minters from other countries.

Like philately (the study and collecting of stamps), coin-collecting is already considered a 'sunset' industry in Malaysia; it won't be long before this pastime fades into oblivion.

While I cannot ascertain how much truth there is in all this negativity, observations during my Royal Mint tenure certainly pointed in that direction. The waning interest was real.

The younger generations were just not interested in what they saw as a mundane pursuit. They had far too many other more exciting diversions, to bother about collecting and studying coins and stamps.

The World Money Fair in Basel, Switzerland opened my eyes to Swiss children insofar as numismatics was concerned. Our booth was swamped by eager children as young as seven, all wanting to know more about Malaysia and its coins and collectibles.

He also asked many questions about the various coins on show, with his father playing translator for me. On my part, I was only too happy to be of service to such a curious mind.

His father explained that the son had just begun collecting coins and the trip to the Basel Fair was his gift to the boy; he could buy whatever coins he wanted. If I recall correctly, they spent a few hundred Swiss francs at our booth.

What a lucky child, to have such an understanding parent who spared no effort in supporting and encouraging his child's worthy pursuit...
Posted by Kama At-Tarawis at 10:06

princess, not to mention they are also good investments. more so the commemorative ones and limited editions. have you checked the current market value of those you have in your collection?

it is indeed sad that interests in numismatics and philately have waned. fortunately for collectors it will not affect the value of their collections. in fact, if coins and stamps no longer have practical use, imagine how their values would appreciate.

i am famous! (i think).
eh nice ones u have!
got any banknotes? cos usually one starts with coins and soon enough will travel to notaphily, banknotes collection.
don't say stamp collecting is dying maam.
one stamp in china - the socalled China Black Monkey Stamp has raised stamp collecting in china. even NYT wrote about it:
http://www.nytimes.com/2010/11/19/fashion/19iht-acagstamp.html?pagewanted=all

Mekyam - indeed they are and I hv sold a few in the past. tapi this current batch will be in my possession longer i hope.. nak pass on to the kids :)

rem - femes la sekejap rem..lol. yeah, i do hv banknotes, mostly bank negara ones.. foreign i hv only a few, ada satu singapore mint punya release portraying former president yusof ishak, a couple of chinese, mongolian and russian ones as well.. and i hv highly prized iraqi notes (gambar saddam, now no more in circulation..:)) all are safely kept NOT at home.. hehehe

Kama,
Thanks to you now this fickle minded old man is bent on collecting coins, not special editions though, just coins of the world. Do you have any loose coins to spare?

Salam kak putri. I share similar concern with you on our younger progenies' interest not only collecting those collectibles but the least to appreciate them. I have bundles of stamps for them to get fascinated with but the collection is just sitting in the cupboard collecting dust. I started the hobby as young as 10 and it give me unspeakable satisfaction having to stare and hold such an intriguing item.

drsam - indeed it's a pity the kids don't know how to appreciate the beauty of those stamps. i know where you're coming from sebab i do more or less the same.. take out my collection, lay them on the dining table and belek2 each and everyone of them before keeping them again.. it gives such a pleasure to be able to just pegang those items.. [are we pathetic or what.. lol]