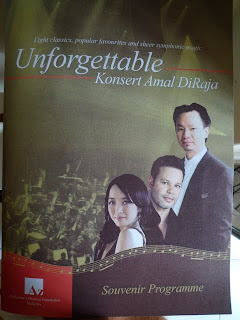 A chorus of "bravo!" and "encore!" reverberated in Plenary Hall, Kuala Lumpur Convention Centre Sunday evening, as Sean Ghazi and Estee Pook ended their final performance with a rousing rendition of "The Prayer", Andrea Bocelli's famous duet with Celine Dion.

While Pak Abu joined the enthusiastic crowd in asking for an encore, I docked in with the rest of the concert-goers in showing my appreciation by clapping my hands continuously. By any account, it was a fitting finale to a memorable evening.

We were at a charity event, Konsert Amal DiRaja 'Unforgettable', in aid of Alzheimer's Disease Foundation, Malaysia. His Royal Highness the Sultan of Selangor was the guest-of-honour; other royal attendees included the Raja Muda of Perak Raja Nazrin Shah and his consort, Tuanku Zara Salim.

The main draw of the evening was Sean Ghazi, that iconic, LA-based singer-actor famous for his leading roles in several London West End musicals, and his innovative marrying of the haunting melodies of yesteryears with sophisticated classic jazz arrangements.

They were accompanied by the Kuala Lumpur International Festival Orchestra comprising 66 topnotch musicians - international and local - under the baton of Malaysian-born, New York-based conductor Eugene Pook.

It's been quite a while since we hauled our ample derriere to an orchestral performance. My last was many years back when the Bangkok Symphony Orchestra put up an awesome show in KL in conjunction with the birthday of King Bhumibol.

Konsert Amal DiRaja "Unforgettable" also presented an opportunity for some women to "do the red carpet". A good many of them dressed to kill as they sashayed up and down the auditorium aisles. Evening gowns crowded the floor, many with lots of bare skin and barely-covered boobs.

While waiting for the concert to start and during intermission, I made the most of my time watching exposed cleavages deep and shallow, in direct proportion to knockers of all shapes and sizes.

For us tudung-clad ones, there was so much we could do without compromising our headgear, so fashion had to take a backseat. Since I had to hide my own, I might as well observe other women's jugs. Pak Abu, my partner in 'titty-watching crime', agreed wholeheartedly :)

It was the first time we watched Sean Ghazi's performance in person. In fact, It was the promise of his presence that prompted us to buy the tickets. As a former entertainment writer, I am loath to endorse artistes but Sean Ghazi is a different kettle of fish altogether.

I think of him as a true thespian; he's just as versatile on Broadway as he is on celluloid and in the recording studio. His is the voice of a crooner in the mould of Michael Buble. Small wonder he was given the lead in a major stage musical depicting P. Ramlee not so long ago.

A satisfying musical interlude that really was for us that Pak Abu felt we should make it a habit to check out the Malaysian Philharmonic Orchestra offerings on a monthly basis. Good idea, that...
Posted by Kama At-Tarawis at 18:25

Kama,
You people are lucky to be in KL. Not only you get Art Fest and Musical Interludes at your doorsteps in KL.
I heard there was a Titty Fest too at the Musical Interlude? That alone should be reason enough for people like Tommy Yew, Pak Abu and Pak Zawi to attend. I bet they are of the purrfect size and not the oversized or the undersized ones often offered at home.

Puteri,
Yes, it is always a pleasure to attend any performance by our Symphony Orchestras and the offerings in this country never disappoint. I too am a fan of Sean, I wish he will come out with another record, his voice is one of the best in the country and combine with his experience and training his singing is always flawless. (Saw him in Miss Saigon in London and P Ramlee here). The trouble is, only a certain segment of the society appreciate him the rest prefer the AF, Malaysian Idol, One in a Million products (although I must say that some of them are actually very talented and has very good voice but they really do need musical guidance).
As for Titty watching Pak Zawi, in KL tak larat nak tengok, go to any fashion shows and society do and you'll get your fill (agreed Tommy?) sampai dah boring (but we are ladies kan - the men doesn't seem to have enough!)
Salam

I watched sean ghazi when he was in the west end musical The King and I. That was so many years ago. i wish i'd hv the opportunity to see him again, on home grounds.

C'mon Pak Zawi & Nana, pls settle down. I think u guys got me mistaken as Mat Bangkai lah. I'm much more refined than that; and tend to get more mentally stimulated by a women wits & intellect rather than their physical assets mah, tsk, tsk!

What lah u ppl? So blardy shallow one!

Pak Zawi - You know, there is an art to wearing a strapless evening gown. Otherwise, one's boobs will look squashed, being 'forced' to stay within the confines of the baju.

NanaDJ & Kak Teh - Isn't he cute? hehehe. I had wanted to take a photograph with him but the line was too long; ppl were queueing up to get his autograph.... malas nak tunggu.

The tudung clad one can also be vogue in the crowd of the strapless and bare skinned ones tau. Not really a fan of Sean Ghazi but he sure has created quite a name in theatre and broadway kan.

TM - You are spot on. I did see some tudung-clad ladies very stylishly dressed.

mamasita - lerrh, style pekebendernyer mamasita.. lol.. it's only music. kalau opera I pun kurang gemar tapi classical music I like very much. What I like most about offerings like this one is their music arrangement; bunyinya cukup mantap sebab guna full orchestra.

Kak Puteri,
Looking from this side of the ocean.. I was a little shocked to say the least to see the video clip of Sean.. almost everyone in it looked so westernized in the way they dress. I longed to see our eastern way become internationalized/accepted like the west.....

Kama, that was quite some trip down mammary lane for you and Pak Abu hahaha. Boobs, knockers, titties, jugs all made for a titillating read, Sean Ghazi notwithstanding.

I'm guessing your nippy vocab did not need help from that synonym-antonym book by your spanking new laptop :)

Zendra - Frankly, I am nowhere without such books to prop up my English. Dictionaries and books as such are my best friends. I remember a long time ago a friend asked, "but how do you read a dictionary?" when I told her I did it, often. my answer was simple, "with pleasure." hehehe