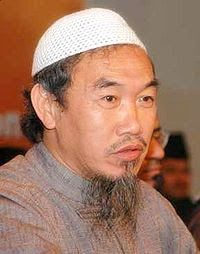 Those of you living in Klang Valley would probably have heard of Pertubuhan Al-Khaadem, a charity-based Islamic NGO established in 1984 by well-known Hadith scholar, Al-Ustaz Hussein Yee.

Al-Khaadem means 'Serving Mankind' and it was established to reflect Islam's compassion and to do charity work among the underprivileged and the needy. Headquartered in Kampung Kayu Ara, Petaling Jaya, Al-Khadem is run by volunteers.

Its founder, Al-Ustaz Haji Hussein Yee, was born and raised as a Buddhist but embraced Islam at the age of 18. Upon conversion, he pursued studies at the University of Madinah in Saudi Arabia where he majored in Hadith. He joined Perkim, an organisation that looks after the well-being of new converts, upon his graduation in 1978.

Six years later, with a group of like-minded friends, Ustaz Hussein embarked on the Pertubuhan Al-Khaadem project, with the aim of fostering a peaceful and harmonious existence between mankind regardless of race, colour or creed.

I first found myself in the sphere of Al-Khaadem in the early 1990s when I was introduced to it by my former sister-in-law, Datin Sofwanah Abdul Rahman (Kak Nah). A lady of too much leisure then, she was actively involved in the activities of Perkim, and had wanted me to be a part of Perkim in view of my public relations business and connections.

Over the years I had followed Kak Nah to many of Ustaz Hussein's Islamic discourse. I enjoyed listening to Ustaz Hussein simply because his lectures and talks were conducted in English. As such, his sessions always drew good crowds, mostly from the corporate sector.

He was also a favourite speaker/teacher amongst the non-Malaysian Muslim students pursuing their respective studies in local universities. One could find many such students, especially from International Islamic University Malaysia (UIAM), at his lectures.

I lapsed on my Al-Khaadem commitment for a few years but picked it up again last year at the behest of a friend. Unfortunately, I have not been consistent with my presence; my attendance is, at best, spotty.

Upon my return from the Hajj, my youngest daughter Nawwar, 24, made the startling decision to trade all her fashionable togs for the hijjab, to quit her job at the advertising agency and to study both Arabic Language and Islam full-time at Al-Khaadem. She also volunteers at the Foundation. This posting is written at her request.

As in past years, the organisation is again putting together two separate youth camps, for teenage boys and girls, in conjunction with the school term break. This year's camps, however, are eco-based and coincide with Ma'al Hijrah.

The youth camp for boys will be held at the Endau-Rompin National Park from 17th to 20th December 2009. Programmes for the four-day camp include Night Walk, River Crossing, Jungle Trekking and Treasure Hunt, apart from motivational & inspirational talks and team-building. Special guests will be Sheikh Hussein Yee and Sheikh Feiz Muhammad.

It is open to boys age 12 and above, at an all-inclusive RM350 per person. Closing date for application is 7th December.

Al-Khaadem is also looking for individuals or corporations willing to sponsor orphans and underprivileged children to join the camp. There will be 15 boys from the Al-Khaadem Home of Hope, five of whom have found sponsorship. The boys of Home of Hope come from multi-ethnic, multi-religious background.

This three-day Islamic environmental camp organised by Al-Khaadem is open to girls age 12 and above. It will be held from 18th to the 20th of December at the Forest Reserve Institute of Malaysia (FRIM), in Kepong, Selangor.

The three-day camp offers participants an opportunity to experience nature, while at the same time learning more about youth and Islam. As with the camp for boys, Al-Khaadem will also be bringing 15 girls from the Home of Hope to participate in the eco camp.

All 15 have, Alhamdulillah, found sponsors. Application, however, is still open to any girl above 12 who wants the experience of camping in the flora and fauna of one of Malaysia's oldest forest reserves. The cost is RM250 per person (all inclusive) and closing date for application is 7th of December.
Posted by Kama At-Tarawis at 22:59

Puteri, I have heard the good ustaz speak during the visit of journalist Yvonne ridley. Very impressive.

and may Allah reward him for all the good work that he is doing.

First of all, I envy Ustad Hussein for accumulating so much amalan and pahala untuk bekalan akhirat.

Next, send my love to Nawwar..I'm immensely proud of her and hope many modern young ladies will follow her example..rezki you Puteri.

ha ha... I was sent by Aunty Nah to ustaz Hussin's camp in Genting once !! He was lovely but I'm afraid at that time, I wanted to go on the rides with Karina more than studying Islam.

Btw, saw pictures of Nawwar in her Hijab, she looks lovely. Salam sayang to her and Ann.

Kak Teh - I do agree. He's a good orator too apart from being a good teacher.

Myra - hehehe, i remember when you were a mere child, always at Tok's or Aunty Nah's house following yr mum.. Gawd, time flies so fast..and now you are someone's wife and mother oredi...

Anon - I kind of expected the issue of Ustaz Hussein's purported Wahabi slant to crop up when I wrote this entry. Nolah.. it's all heresay.. you should attend some of his lectures to determine whether or not he is a Wahabist..

azrin - woo hoo..Mama also say Go Nawwar Go! hehehe.. you made her day, you really did..

Kama,
I really admire this Ustaz. He is a Moslem in the truest sense of the word because he found Islam and was not born a Moslem like the many of us.

It's so heartening to hear of a practical, practising Muslim. We need more like him.
Thank you for this posting and best wishes for your lovely and brave little girl

to know is to understand dear Anon.. We are not wahabi or what is wahabi to you? we are sunnah wa jamaah.

pak zawi - betul tu pak. Many of us are guilty of same - taking things for granted just because we are born muslims. the ones who found islam macam ustaz hussein ni usually lebih menghayati islam more than we do.

AsH - you couldn't hve been more right. he goes about doing all these without making a great big fuss about it..

i am so exited to see your posting on al khadeem which at one time i was very active with this non profit org.for dakwah. thank you so much for sharing this. i hope to read more about them.
salam . peace be with you.

I inclination not concur on it. I think warm-hearted post. Especially the title-deed attracted me to read the sound story.

(1st, sorry about my grammar)Because we're all moslem are brother/family, we must love and give our brothers a betterway or something usefull for live, 2nd try this :

some... you can copy and paste the script then put it into your web

yes we all muslim avoid raceism for the betterment of Muslim Ummah and human being.
online quran explore