Here I am, back again for the umpteenth time, with yet another promise to stay committed (and not really believing if I ever could). The flesh has been weak for the longest time now but the spirit remains willing, that much I can admit to.

There was a time when putting pen to paper (so to speak) was as natural as doing one's daily toilette, and just as satisfying. Somewhere along the way, however, something happened. The thoughts plateaued and dimmed, lethargy set in, procrastination ensued.

The last time 'Kata Kama' saw life, on January 17, 2013, I was a freshly-minted opah (grandma), hardly a month old. Today there are three cucus in tow - Hasan, Ijaz and Hasan's little sister, Huda.

Way back in 2008 whilst on the haj pilgrimage with Pak Abu and two years later during umrah with the whole family, I shed tears at the foot of Jabal Rahmah, asking for Allah's mercy to bless my children with marriage and little ones of their own.

Five years on, the household has expanded to include two sons-in-law and one daughter-in-law. God willing, another daughter-in-law will complete the equation come February next year.

All things considered, life has been good and kind. There had been kinks aplenty in the past and I know life may still spring a surprise or two even at this ripe age. But rest assured, I no longer sweat the small stuffs.

And this is as far as mukadimah goes. Watch this space (after all, the crazometer has been de-activated) and in the mean time, have a Kitkat! 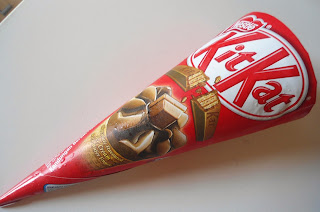 I had magnum choc brownie while trying to think what to write for the 06052015 blog entry. I know, not a good breakfast food but i had to find some idea to write.

Transitions are good. They allow for contemplation and a re-look at changing game rules. And subsequent observations therefore will be fresher and more relevant. Good luck and all best wishes. Will be following earnestly.Thank you.

Loved your postings then and still loving it! So we shall blog on? *wink wink*

Salam and good morning Kak Kama. Nice to see you back. Let us not worry if we can keep our promise of continuing to put up posts... I'm not pretty sure if I can do it too. But writing a blog post is very much more satisfying than putting up a single line FB status update (although I don't think I'll be abandoning FB entirely, hehe).

Welcome back Kak Kama. Glad to see you making a comeback. I am trying as well.

Assalam Kak Puteri..Welcome back! Missed your postings for ever so long and am glad you are back :)

There is no stopping you once you have started. Rest assured a good well written piece however short will be appreciated.

Welcome back princess. Looking forward for more of your anecdotes.

Wow, that was a l-o-o-o-n-g break Kak Puteri! Can't believe how much fun the anticipation has been. As usual with bloggers, the quietly sane and simple kind of fun.

Alhamdulillah ..Salam Perkenalan ..used to be your silent reader ...
Welcome back to all makcik and pakcik bloggers...well...I think dah ramai yang jadi tok and nenek bloggers! hehehe ..same here..dah jadi Tok Mi (my children call me Ummi so, there goes "TokMi" for me)

They go very well with blogger hopping. How are you Kak Puteri?

I need an ice-cream now

Hi Puteri,
Will be joining you on the coming Zoom Meeting this Sunday on Pasir Mas Heritage Book

Thank you for this excellent post. Very informative!
kiss918 apk is arguably the most prominent online casino in Malaysia, bringing you the hottest, top trending games on the internet, all in one destination. 918 Kiss has all sorts of entertainment content, ranging from fishing games and live table games to one of our main attractions that is slot games.
kiss918 online
Kiss918

I really appreciate your blog. Simply awesome!
Natural Joint Supplements Duplex® strives to be your trusted healthcare brand, a brand that will never settle for less than the best. We firmly believe your health matters. At Duplex®, we pledge to make your well being our priority. Our aim is to deliver effective, yet affordable healthcare simply because we believe good health makes living more meaningful. We are your trusted ally on the journey to attain a healthy mind, body and spirit.

What an amazing post! Keep up the good work!
joint supplement malaysia Duplex® strives to be your trusted healthcare brand, a brand that will never settle for less than the best. We firmly believe your health matters. At Duplex®, we pledge to make your well being our priority. Our aim is to deliver effective, yet affordable healthcare simply because we believe good health makes living more meaningful. We are your trusted ally on the journey to attain a healthy mind, body and spirit.
anti inflammatory natural medicine
supplements for painful knee
broccoli sprout malaysia
botanical powder mix & antioxidant rich foods


Your topics are always interesting and educational. I enjoyed it very much!
Microsoft Office Specialist RE2 Learning Solutions (Asia) Sdn Bhd was founded in 2016. The company is one of a leader in the field of professional IT training in Malaysia. Over the years, RE2 (Asia) has helped thousands of young learners, companies, government departments and agencies to improve and develop their IT skills.
Microsoft Office Specialist Certification

Awesome post. Very inspiring!
Established in 2002, RE2 International Computer School was one of the first schools in Malaysia with a well-developed ICT curriculum for Primary School and Secondary school students. Our curriculum was heavily based on the national curriculums of The United States of America and United Kingdom.
Computer Class In Ipoh
Computer Course In Ipoh

Terrific post! Love your work!
Rebrand Web Design Malaysia Web Design KL Rebrand specialise in website design, e-commerce solutions, digital marketing, branding strategy and much more. We strongly believe that having a high-quality website doesn't necessarily need to cost a huge sum of money. Hence, we are a group of professionals that came together with a goal in mind: to deliver excellent web designs that provide value to our customers that range from startups to enterprises and large organisations.
Web Design KL
Web Design Malaysia