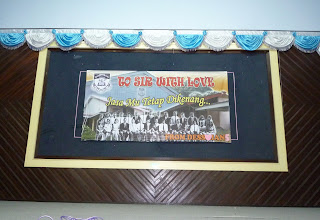 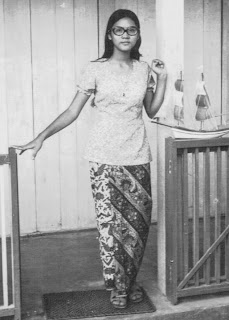 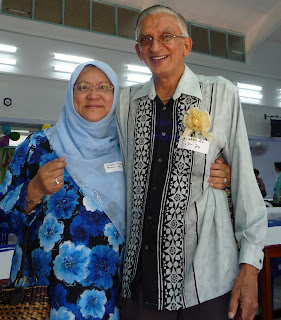 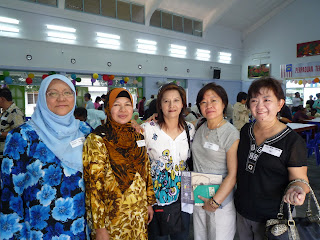 Class of 1972; wow, everybody montel-montel! 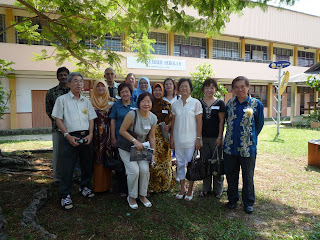 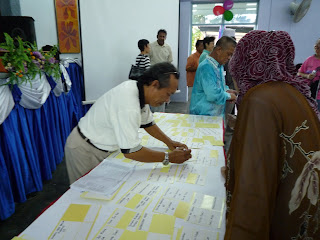 Jaafar, my senior who was also a neighbour. We used to lepak at his house. 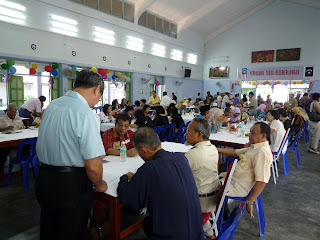 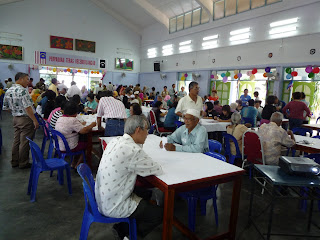 I am not out of place in this wargamas crowd... 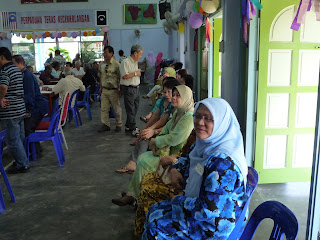 Pretty ladies in a row (ahakk..!) like those perempuan joget in BB Plaza of old!


He must have been in his mid-twenties in the early 1970s, probably a fresh graduate too, when he landed himself in provincial Dungun, in DESS (Dungun English Secondary School) to teach Mathematics to the likes of statistical morons like me.

At well over six feet, Mr Magan Lal was literally head and shoulders above everyone else in the entire school, especially us, a motley bunch of acne-ridden, gangly and giggly teenagers whose main preoccupation was lording it over apprehensive juniors while at the same time kowtowing to the bullying seniors.

That I disliked Maths with every fibre of my being was no big surprise to my largely Chinese classmates, to whom Maths was kacang putih (peanuts). I still remember one of the boys shaking his head at the thickness of my skull, saying: "What is there not to understand? Numbers only maaa..!"

Given half the chance, I would rather be lost among alphabets, not numbers. Eighteenth-century English countryside would be as good a place to start, dancing amongst Wordsworth's daffodils or enjoying the warblings of Keats' nightingale.

But the LCE (Lower Certificate of Education) exam was fast approaching and Maths was a necessary evil. It was a 'must-take' subject, no two ways about it. Unfortunately enough, my mathematical genius did not go beyond arithmatic's standard multiplication table (it ended at 12 x 12 = 144).

Although I was clueless, Mr Magan Lal never flinched. My Credit 6 in LCE's Mathematics was as lame as could be, compared to the string of As that eventually booked me a place in a boarding school down south in JB, but I was on cloud nine just to get that miserable C. It was testament to Mr Magan Lal's patience and perseverance.

I remember those bony fingers well; ceaselessly drumming on my desk, occasionally folding his arms across his chest as he stood there, patiently watching me sweat trying to figure out the geometrical puzzles and trigonometrical maze (and mess) staring back at me.

Thirty-seven years down the road, and the good old 'Sir' and I met again. After all these years, he was still slim and trim. And he still had his own hair. Comparatively, yours truly had piled on the pounds and looked like a barrel. If at all there were similarities, we both had lots of grey hair.

I couldn't hide my excitement, exclaiming "Mr Magan Lal, SIR!", silly giggles and all, very much like a bashful 15 year-old all over again. He remembered me too; the best thing was he even recalled that I was the class monitor, when I myself had forgotten I ever was!

Some 300 former students and teachers from classes in the early '60s to the '80s packed the school hall of DESS in Sura Gate, Dungun, last Saturday (06/06/09) in celebration of the school's 50th anniversary.

The organisers had earlier indicated that the event would be an informal affair; no long-winded speeches and no performances of any kind, just a get-together of long-lost school friends, presentation of tokens of appreciation to teachers and lots and lots of photo-taking.

The spread was simply marvelous; nasi dagang and nasi minyak with all their respective accompaniments, satay, kropok lekor, ketupat, lemang and rendang, roti canai, rojak mamak and rojak buah, numerous types of kuih and sweetmeats including local delicacies like akok and the like.

I wandered around looking for those from my batch of Form Five 1972. There weren't many this time around, perhaps because we have had our own three times in the past four years (twice in Kuala Lumpur and once in Dungun). The last was two years ago, culminating in a round of golf, followed by lunch, at the Dungun Golf Club.

Still, it was a memorable outing for me, for I met many seniors who were classmates and buddies of my elder brother Yusof (who was unable to make it since he was tied up with the preparations for his son's forthcoming nuptials). One of them got me momentarily flustered by saying "We were interested in you la then, but nobody wanted to admit openly!" Walauwehhh....!

I also met the headboy whom I used to date until he went to Sixth Form. He came with his wife; we exchanged pleasantries. It was good to see him, in his late '50s now, doing well. In fact, we had a chance meeting in London in 1975; he was then a student there while I was working in a publishing house somewhere in Hatton Garden.

After stopping by the cemetery to say some prayers for my mother who died last year, Pak Abu and I left Dungun for a leisurely drive back to Kuala Lumpur.... but not before doing a bit of shopping (for textiles) in Dungun town. They were beautiful and darn cheap! Along the way, we also 'singgah' Cherating to buy satar (grilled fish cake, an East Coast delicacy). We got home safe and sound, just before Maghrib...

What a lovely reunion. Even after all these years, your Maths teacher still remember you? Oh my! You must have been an outstanding student! Thanks for sharing.

Where would we be without all those dedicated teachers. Take care.

Mrs N - Indeed it was. I am glad I made it to Dungun, even though it was a bit of a rush. I guess the teachers ingat because I was an active student - sports, debate, guiding, glee club, english club, school magazine editor.. entah apa2 lagi.. lol

Pak Idrus - you have it spot on. I hv the utmost respect for teachers. the ones I had (with the exception of one) were supportive of their pupils. I have had the best,Alhamdulillah..

Kama,
I am glad to know you enjoyed your school reunion.We had our 50th anniversary together with STAR,STF.However,I enjoyed more when we visited our alma mater in Tanjung Malim a few years back.It brought tears to my blurred eyes..

Adib - tq for dropping by. Indeed bergenang air mata bila jumpa all these people from your innocent past. even more sedih to think you are in the wargamas category dah..hehehe..

Glad u had a great time at your reunion, good food, good company & good reminiscence, ya the good old days. We baby boomers really had it, did we? Make me feel sad for the ‘X’ & ‘Y’ generations.

Yeah sure, I’ll buy a ticket (50 sen?) for a joget, pretty maids all in a row, sayang not in their kebayas..heheh.

lovely reunion lah...glad to hear that u enjoyed it.

Insyallah mine will be end of this year...17 yrs after i left my alma mater

Meeting up with former school-mates can be very fascinating, especially when they look different but still the same. Some have become sophisticated, and some more yakky then before yet others have stayed exactly the way we last saw them, size-wise and even mannerisms. Happy you had a great time.

With your kind of bubbly personality, I think most of your teachers would remember you. I am not too sure how I would look like and react when I am attending 50 years Anniversary at my alma mater. Sure I dah tak ada gigi.

Puteri, I love reunions, you get to count each others wrinkles!! haha, the boys (for they still behave like boys) ramai yang dah tak ada rambut...and i laugh everytime we peered and squint to look at each other's business cards.

tommy - i know I will look like a wrapped jackfruit in kebaya.. hehehe

edelweiss - sweetie, you are so young, only 17 years ago you left yr alma mater.. alaahai.

zendra - i had a whale of a good time; apart from shape yg dah change, our enthusiasm remained the same.

tata - kalau boleh I dont want to sell the house. seelah how. bukit besi reunion sounds fantastic.. a going to call the number you bagi..

kak teh - we all did just gthe sme kak teh, peering over each others's business cards.. dah rabun kak teh the whole lot of us..i liked to see some of them botak dah..LOL.. duru rambut punyalah lebat..REMOS ala elvis lagi!

Nice one Puteri, the SYT 17y.o photo. Look as brainy & so like Harry Potter; must be the glasses..heheh. Any photo with your kebaya on?

Maths is not my cup of tea too, I have difficulty dealing with numbers, but in letters I have keen interest. I've think skull too..:)

I'm in tears while looking at the reunion photos. Memories flooded back.I was yearning for the DESS reunion, but sad enough I never know about it. Yang sangat sangat terkilannya, I was in Dungun from 3-11 Jun. So near yet so far.I left DESS in 1969( 4 years your senior I think). Anyway thanks for the wonderful stories. It helps.

Oh dear, kak Wan, what a pity! Why don't you drop me a line at a e-mail.. insyaallah kita organise lagi in the near future..

Aisay Ramasamy, I remember you laa.. God, it has been such a loooong time, my friend! I am going to search my old school pixs to see if I can find you lurking in the background somewhere.. hehehe.. Nice to hear from you again after all these years. Will give you a tinkle when time permits..

Thank you Puan,
Yuor promt repy is much appreciated.

Our next reunion would be on the 30th April 2010. Any objection to this date?

any reunion for this year?do inform me if there is such a reunion in future. i will be very interested to attend. i was the maths teacher in DESS from 1976-1980. my email is itlaubp@gmail.com.

Mr Lau - hello there cikgu! they had a reunion in may but i wasn't able to attend. will keep you posted on future developments.

Thank you. Here is another ex-teacher of DESS from 1976-1980.DR Gan Ching Chuan. Remember him?
http://umexpert.um.edu.my/papar_cv.php?id=AAAJxnAAQAAAF9jAAl
Do keep us inform of any future reunion.My contact no is 0177785163.OK

Very nice blog page. Hello to all ex-DESS students and teachers. I don't know if anybody remember me, I was Science teacher in DESS in 1966 and '67. At that time Mr. Lau Kong Bin was temporary principal. I think the school was newly built. I am Mr. Mah Khye Cheng. At that time I just graduate from Teachers College in Penang and DESS is my first posting. After Mr. Lau, next year Mr. Jamaludin is the Principal. He just freshly graduate for Varsity. That time I used to stay with him in the teachers quarters. There are so many wonderful memories, but unfortunately my old brain cannot remember the other teachers' names. But I just want to say, I had a good time teaching, reaching young active minds in Dungun. Keep up the good work everyone. If anyone want to reach me my email is casey8818@yahoo.com. You are welcomed to drop me a line or two. Best wishes. Bye.

What a pleasant surprise, Mr Mah! I had just entered DESS in 1967 (Remove Class) so please forgive me for not being able to recall your goodself clearly.

Any which way, I'm pleased and humbled that the old teachers are reading this blog of mine. Rest assured you shall be informed of the next reunion. Good day to you, Sir!